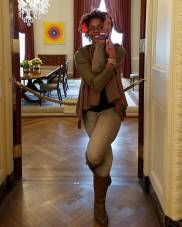 My name is Dr. T’Challa Cannon and I am a self-taught yogini since September 2014, then CYT 200 yogini since July 2021. I am also a clinical therapist with a specialization in child and family from Loyola University Chicago. I became interested learning yoga after being accepted into my doctoral program and figured practicing the postures I began seeing in mini challenges on Instagram as a way to minimize any stressors from my courses.

In the beginning, I figured the postures were fun ways to move about outside of my regular workout routine (which at this point has become non-existent…I really gotta get back to the gym). Also, seeing fellow yogi’s & yogini’s move their bodies with such discipline, I wanted to learn that.

Eventually, the practice of yoga became more than postures. It became a way of life. Understanding about being one with myself. Letting go of toxic things in my life (relationships, work, etc.), It helped transform me in a positive way.

In August 2015, I began my business as Y3L (Yogi’s Live, Love, Laugh): Mind, Body, & Wellness in Metro Detroit, MI. I’ve taught individual and group sessions within the privacy of student’s homes and out in the community. Initially I was shy to practice my asana postures in the public, but after telling myself that my practice is mine and mine alone, I got out of my fear and began practicing whenever and where ever around town.

Fast forward to 2017, I have relocated to Metro Atlanta and have become known as Yoga (the Biker) for bringing my two passions into one. Both practicing Yoga and riding motorcycles takes time, patience, and being one with yourself. Riding puts me in a zen mood, just as yoga and allows me to be free during that time. Now residing on the West Coast, I have branched out to include supports for my fellow veterans and maternal services for my fellow mothers.

As always, I continue to learn & grow from myself and my fellow members in the community as we teach one one another to live through positivity by enjoying and living life to the fullest.

I look forward to working with you!